Skip to content
The black heifer I “lost”, is back. Let me tell you the story…..
On Thursday this week, when I popped in to the farm in the afternoon, the cattle are nowhere to be seen. All six, vanished. I see no evidence of the them going through the part where I had put up a fence. I see no evidence of foul play (car tyre tracks etc..) I must say I was quite relaxed. Did not really stress too much. Looked for them a little, but when I could not find them, I left, back to the office. (Assuming they were in the forest somewhere). My neighbour,Richard would have told me if they had gone over to his side. I did not see them anywhere the road side.
Friday afternoon I went back. Still no cattle, I walked a around calling them. I thought I heard them in the forest toward the east of the cottage, but I could not be sure. Again I left, not too worried.
Yesterday morning (Saturday) I went quite early, planning to search the forest with Litha, and there they were back in the camp, lounging at the water trough. (Well five of them at least. The black heifer was still missing.)
I put some time into erecting a new temporary electric fence around what I have called  “Camp B” and left them there over night. 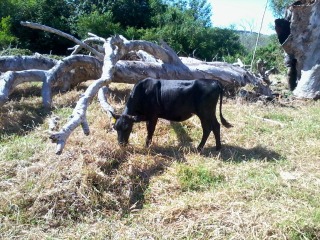 When I went this morning, The five were still in Camp B, and the black heifer nowhere to be seen, I called and made a noise. I walked in the forest near the dam and listened out as best I could for her call, then when I walked up back to “camp b” there she was. I could tell by where she had disturbed the temporary electric fence, that she had been in the Port Jackson forest up the hill. (there is a small herd of calves just other side the fence)
So now with all six back in camp B, I have made a temporary electric fence subdivision. Trying now to begin to work toward the grazing plan I have in mind.
In other news, the dark brown heifer calf was looking very ill on Tuesday. It was limping a looked disorientated. We separated it and put in in camp A. By Wednesday it was looking a lot better and I put it back with he others. The bull seems to be quite rough and with push the others out of the way if there is some food that he particularly likes. Perhaps dark brown calf came a little too close.I can see how in future it would be best to have the calves separate from the adults.
Transfer is very close now. On Thursday the bond registration attorneys said that the documents had been “lodged” at the deeds office and that I had to pay an invoice of R16 000 for the transfer to proceed. I paid the invoice first thing on Friday morning, so I am expecting a notification from the attorneys this week informing me that the land is now in Hlubi and my name.