There is a livestock auction on the last Saturday of every month at Fischers Corner. We were hoping to get and idea of prices for calves. After the auction I think we know that we are looking for calves older than three months – around the 100 kg mark.

We met Gerrie at the auction – He is the guy whose farm Nguni Matroos  took us to when he was not there last week. Gerrie gave me his number – I will call him when I am Tsitikama next.

edit 15 May 2014 – Gerrie Rademeyer grows bottle fed calves – he weans them at about 3 months and sells them at between R1000.00 and R1500.00 each. Bottle raised calves are much more likely to contract diseases that calves raised by their mother. But this is where we had to start.

Nguni is 73 years old. He has lived in an around Tsitsikama his whole life. He has only one arm, but rides a bicycle, pushes a wheelbarrow and digs with a spade. He is an inspiration. I struggle to communicate with him, my Xhosa is bad, his English is bad. We settle on Afrikaans, which is second language to both of us. Nguni, has taught us a lot about the land and how things work, We are indebted to him.

(Edit 11 May 2014 – Nguni has since died. He was husband to Nomathemba who is a cousin to my wife’s mother. It was Nomathemba and Matross, who we would go visit when we first began to take my mother-in-law down to Tsitsikama. Its a long story actually. My mother-in-law grew up in Tsitsikama on the Mfengu land there. Land that had been granted to the Amamfengu about 150 years ago in return for loyalty to the British through the 100 year frontier wars. The AmaMfengu were then removed from their land in the 1970’s by the apartheid system. In the 1990’s they were allowed to return and Hlubi and I have been spending some time assisting Hlubi’s mother to stake her claim to her portion the returned land. Our campaign has been successful and Hlubi’s mother now has her own house on the form “Wittekleibos” and has access to communal lands.

From the stories I have been told, however, it seems the land before the removal in the 1970’s was very productively farmed. Now people have returned, but it seems the whole fabric and “memory” that held them together and cased them to be a functioning economy has not survived the disruption and dislocation. 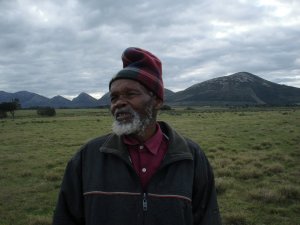 We netted this one and about a 100 others on the Touw river at Wildernis. I have added them to the 12 or so that I already have in the pond in the backyard.

(Edit 11 May 2014 – Some of the Tilapia I still have in my tanks carry these blood lines. The Touw River is even cooler than Port Elizabeth’s river’s so I suspect the fish we netted there are naturally selected for cold water tolerance) 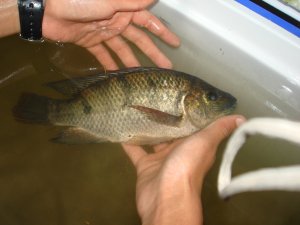 Though the hen was sitting on eight eggs. only three hatched. I have made a cage for the hen and chicks to be kept in. This should keep them safe from the other chickens and from rats.

The ducks eat anything green, So what I have done is to put up a little fence separating the east end of the pond near the chicken run, from the rest of the pond. The fence runs through the water. I have planed waterplants and veggies on the protected side. In the water I am growing duck weed, which the Tilapia can eat from underneath.

We bought three Venda Fowl, from a touch farm that was closing down. Two hens and a rooster. They are great. I built a fence seprearting them form the duckpond because I don’t want them scratching everything to pieces.

Edit 11 May 2014 – What we found is that the ducks completely demolished the duckweed and another vegetation very quickly. The water, even from these few ducks became very dirty, too dirty to keep Tilapia in any reasonable way.

Israeli Conscripts. You have a choice. I explain what I mean in this

I have dug a big hole at the end of the garden. When I say I, I mean Freddy. But the hole is done and Mandisa’s ducks are now swimming in the pond. I would still like to plant the edges….But what I would really like to do is put Tilapia in the dam. I have been reading about Tilapia and it sounds like a really exciting idea.
(edit – 11 May 2014 – The duckpond we built is at our residence in Walmer – its a 1500 sq m plot and it still houses the duck pond, though there are no ducks on it and it is now quite overgrown with some Tilapia under the surface and some duckweed floating on top) 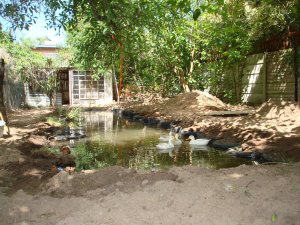