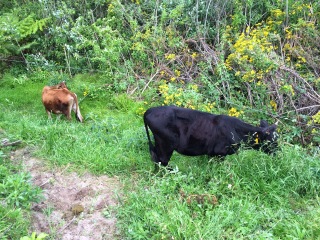 I have not spoken much about the cattle since I lost the calves and the bull. But is actually going quite well now with the two heifers. A brown one and a black one. We move them to new pasture everyday with the portable electric fence.

We keep the “camp” small enough to ensure that they graze everything down (not just the tasty stuff). Cattle are picky eaters, they will first go for the greenest grass and then try the other stuff if they have to. So by keeping the camp just the right size I can ensure that they get enough, but that they don’t just pick and choose the best grazing. The important part of this strategy is that all the unpalatable stuff gets eaten as well, making space for other species to come through. The exercise is really all about building the soil. The cattle improve the soil in three important ways:

Overgrazing is of course an incredibly destructive force, but in the a managed environment, grazing animals can build the soil and save the planet. (life is not possible without topsoil – just think about it)

So how it practically works though the week, it that Mandoza (my trusted assistant) moves the cattle to new grazing every day. I prefer to move them in the afternoon when the sugar content of the grass is higher. I have a simple diagram which I leave in the cottage so Mandoza and I can refer to camps by alphabetical letter. We talk mainly by texting through the day. I charge the battery  for the electric fence here at home and once or twice a week I would make sure a newly charged better is taken to the farm. If we use this configuration we have 20 camps. so that would mean that would mean that each camp would get 20 days rest if each camp were grazed for one day. Of course depending on rain and time of the year, 20 days may or may not be enough time for the grazing to recover, so the idea would be to vary the size of the camp accordingly. I can see now that we have had some rain and the days are warmer, the grass is looking good and I can keep the size of the camp quite small, giving me perhaps 30 or 40 camps in total. The grazing is looking quite healthy, If I compare it to my neighbour’s place where he has sheep, cattle and goats continuously grazing the grass down to about 50 mm high, then we are looking very good.
I am also slowly, but surely expanding the pasture. Over the weekends I spend time with the chainsaw cutting out the alien invasive species: Black Wattle, Port Jackson, Inkberry, Blugum, Poplar and Cape Wattle. I start buy cutting paths just wide enough to run the electric fence in. I create a camp in a forested portion. The cattle eat some and stomp down other parts including brambles and vines making it easier for me to come in with the chainsaw. I find it does not take long for the grass to begin to establish in areas where I have opened up the ground to new light that was previously blocked by tree cover. Anyhow, I enjoy working with the cattle. I see them as my landscaping assisants. We work together to bring this farm to be the most that is can be,