I went to watch the Rugby yesterday. South Africa played Scotland. The stadium is beautiful and its always nice to visit there. Of course I am grateful to the people that invite me to these things and for the food and the booze and all the hospitality that goes with it.

I try my best to get in the spirit, but yesterday, like with most of these type of events, I felt that I had disappointed my hosts by not getting more into it. And its not really something that’s changed recently, to be honest I have never really felt part of the “crowd”. I do try. I do put in effort but, for reasons I don’t completely understand, I don’t feel what I see many people around me are feeling. Are they faking it? Are they really interested in who scores, or who comes out of the scrum first, or whether the ball is kicked over the poles to add an extra two points to the scoreline? Are they really thrilled that the Mexican Wave has gone twice around the stadium without stopping? I do try to fake it. But most of all it just makes  me sad and confused to know that I am having to fake it.

All I see is thousands and thousands of people hypnotised and hysterical; falling hook line and sinker for a massive corporate marketing exercise. It is my fascination with the scale of this hypnosis and the willingness with which we embrace it that plays in my mind over and over while pretending to watch the game.

But at least I did manage to get out to the farm this morning. It really looks to me as if though the brown heifer is pregnant, her genitals seem to be swolen and oversized, he udders seem to have enlarged, she seems be dragging her hind legs a little and every now and then she arches her tail as if though she is about to poop. She is a heifer still and this will be her first calf, but I really don’t have the experience to be able to tell. I will keep watching carefully.

We have made progress with week with stripping down the interior of the “north room” I was hoping that we could just scrape off the flaking paint, but on the west wall (where the prevailing wind and rain come from) the plaster has had to come off as well.If I can get this room into a habitable state I can begin to sleep over there (at very least for weekends) and get a bit more done. I would really like to be able to really get into the house repair project and commit some real time to it. The experience I had with the builder there was not a good one. I know it will take longer, but I would prefer to do it myself. 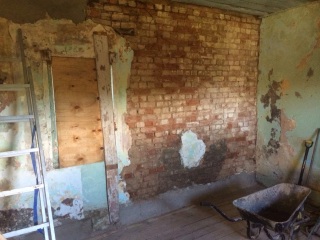 I plan to take some leave from the office in the next week or two. I will use that time to make a big push forward.