Its been really cold this week. Winter has come in a big way. While there is lots of rain, I can see that the grass is not growing without the heat an the light it needs. 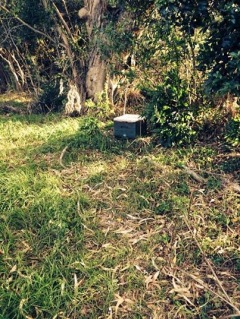 But the big news is that, we now have bees. Yip. The swarm was moved out there on Tuesday night after work. It was a swarm that we had caught in a “catcher box” at our home in Walmer. The bees tried to make a nest in an air vent in my workshop toward the end of last year. We called the bee keeper and they came and set up a box which the swarm promptly moved into. We have a swarm almost every year in Walmer and every year we call the beekeeper to catch it. So for years he has been taking it away somewhere else. This year we took it to Pebblespring Farm. My sister says its an omen of sorts. “The Bees will seek out their beekeeper” she says.

Well, if I am the beekeeper that this swarm has been seeking, I am afraid that they have found a beekeeper that is not very ready for them at all. I don’t feel ready to take on bees, it was not at the top of the list of things I wanted to get done.

To be honest it all feels like a bit too much. I am not getting nearly enough progress on the cottage, let alone the construction of the new house. Its a complicated dance. I have to keep my professional life going so I can bring the cash in for the project. The more time I spend in the office the more I am too exhausted to think of the farm. The more time I spend on the farm the more I begin to worry that I wont be able to bring the money I need to do what needs doing on the farm.

But for better or for worse we have now employed Mandoza full time on the farm. Monday to Friday, earning weekly wages. Mandoza is able to make his way to and from the farm and does not rely on me for transport this is a big advantage.

He has spent the week clearing up mostly trees and branches that have been cut making the driveway and other paths. It will take a long time. the site is big and out resources are limited.

But perhaps this farm has been to me like a swarm of bees finding its beekeeper. It has come to me “ready or not” in fact quite a bit more not than ready. Perhaps, as an experiment I should just trust that idea and go with it for a while. What’s the worst that could happen?