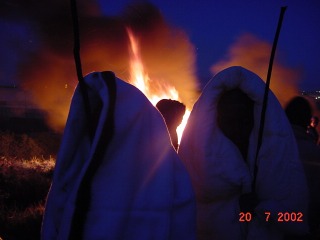 Freedom is so complicated. There are so many difficult decisions to make all the time. Do I get Top TV with its new porn channels? Do I marry a gay person? Do I wear a headscarf to work? Do I circumcise myself after high school? Do I circumcise my son at birth? Do I just let my foreskin do its own thing?
It was all so much easier in the old days when they treated us like children. We were told what to think, told what to do, told where to stay, who to have sex with and what gods to pray to.  Now of course, there is so much choice that it is mind boggling and we all suddenly expected to be adults and make up our own minds.
It does seem though that the ideas that we have of freedom take longer to trickle down to some aspects of our lives than it does to others. The aspect that I am quite interested in of course the urban aspect. Cities and towns in South Africa now accommodate half the country’s population. That means that 50% of the country’s population now look to towns and cities for the space they need to express their freedom.
So, I ask:
“How has freedom changed the shape and form of our cities since the days of apartheid?”
When I drive the dusty streets of Missionvale or Motherwell, I am struck by how little has visibly changed since freedom. There are still shacks, far and remote from the city. Refuse clutters up open spaces and things seem generally run down. My mother-in-law lives in a cul-de-sac in Connacher Street, New Brighton. (Yes I have the freedom to choose a mother in law from New Brighton) I have been visiting her there since the late eighties and have, since those days, every winter, had to park my car in the same muddy puddle outside her house. Freedom has not yet tarred the dirt road outside my mother in law’s house. Freedom has, though, managed to build a Stadium, a Casino, two five star hotels, a number of glitzy shopping malls, a billion dollar container port and a very big brewery.  Sure, the townships have rows and rows of new concrete block, featureless RDP houses. Some street lights and sewers have been installed, but no matter what way you look at it, we are still faced with a stark and distinct contrast between town and township. There is no blurring of the edges in any way. Yes, millions have been spent on infrastructure. Yes, the scale of the problem is immense, but we would not be doing justice to the challenge by not being brutally honest that we are nowhere near achieving the objective of making “township”, “town”. If we continue to move at this pace, I can assure you, our cities in 20 years’ time, will still be characterised by the terms “town” and “township”.
Many of my friends, I am sure, will say that I am confusing “freedom” with “prosperity” and that we are all now free to pull ourselves up by our bootstraps. We are all now free to get a fancy job and buy a house in Summerstrand, away from the muddy township streets, littered parks and shack land gangsters. But these friends may be overlooking an important piece of context here. We must remember that the shape and form of our cities is set in the mould of a grand apartheid plan. A spatial plan that not only kept people of different complexions apart, but much, much more significantly, housed  the poor and working class in locations remote from the city centre, remote from opportunity and remote from cultural institutions. It kept the poor remote from all the benefits that come from the proximity generally associated with living in a city. But most curiously and surprisingly, in Nelson Mandela Bay, we have continued to build our city in this mould. We have continued in almost all instances to perpetuate the apartheid city masterplan; locating poor and working people further and further from the centre beyond Motherwell on the road to Addo and beyond Bethelsdorp on the back road to Kwanobuhle.
No matter what we say, poor people are not free to live where they want in the city. Poor people are not free to take advantage of the opportunities that the city has to offer. Poor people continue to be located in such a way and under such conditions as to be lumped with all the disadvantages of rural living, without any of its advantages. They are located in such a way as to be exposed to all the disadvantages of urban living, without any of its advantages. Ask these people to list what has changed in their lives since freedom, and I expect you will not need a very long page.
My argument ,  therefore,  is  that, quite a few (not all) of the causes of poverty and barriers to progress in our city have to do with physical and spatial planning features we have inherited. My further argument is that we have done very little so far to undo this terrible planning legacy, we are instead, perpetuating it.
We can definitely do better, but in order to do so we have to agree that this matter belongs on the agenda and deserves urgent attention. “Business as usual” Is just not an option.
THC