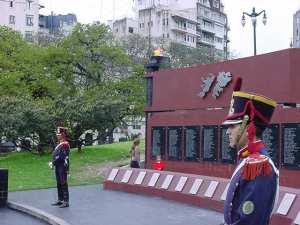 When I was in Buenos Aires in 2003, I visited the Memorial to Argentinian conscripts and professional soldiers who lost their lives in the Falklands war . What interests me about this war, is the general media and public interest generated by the incident. (Or maybe more correctly, the media dis- interest in the Battle of Cuito Cuanavale and the Angolan war.) In many ways the Falklands War was a much smaller (and less strategically significant) story than the Battle of Cuito Cuanavale. 907 Soldiers died in the

while at least 4000 troops died at the

At the time, the South African Military PR, tried to sell the battle as a success, history has shown however, that, in fact, this battle set in place a sequence of withdrawals and retreats for apartheid forces in Angola, Namibia and perhaps even South Africa!

This disinterest does not trouble me. I just find it curious!

5 thoughts on “The Famous Falklands War”